Latest from the Team

Let’s get straight to the big news:

There. We said it. This is a yuuge milestone and we know you’ve been waiting patiently for a release date. Want more? Good, because we've got more! Let's start with the new trailer:

We’ve released four behind-the-scenes dev diaries of Hob and several gameplay videos and trailers, so you might feel like you know quite a bit about Hob, but there's always more to discover. Let’s test your knowledge! We rounded up six facts about Hob we bet you didn’t know. We hope you can prove us wrong! If you learn something new, tell us on discord or social media! And don’t worry, we know that discovery is part of the joy of Hob. We are keeping back plenty of surprises for when you play it for yourself.

Whether you play Hob on PC or PS4, we have a bonus for you when you pre-order now: 10% off the price of $19.99! We're also launching the Runic Games Collection on Steam and GOG today. Take advantage between now and September 26th to get Hob, Torchlight, and Torchlight II at a heavily discounted price of $24.99.

If you're a PlayStation owner, you get a pre-order discount of 10% for regular users, 20% for PlayStation Plus subscribers, and every pre-order comes with our dynamic World Shift theme! Take a look at this GIF to see how the opening animation will transform your console:

Thanks to Truant Pixel for the design. See the full theme, including music from Matt Uelmen, here!

Calling All Achievement and Trophy Hunters!

What’s better than collecting achievements and trophies? Naming them! That’s right, you have the chance to name one of the achievements/trophies in Hob. If we pick your idea, we will even put your name in the credits! This is must-have bragging right for any serious achievement/trophy collector. We also have tons of other prizes, including a free copy of the game and exclusive Hob swag. 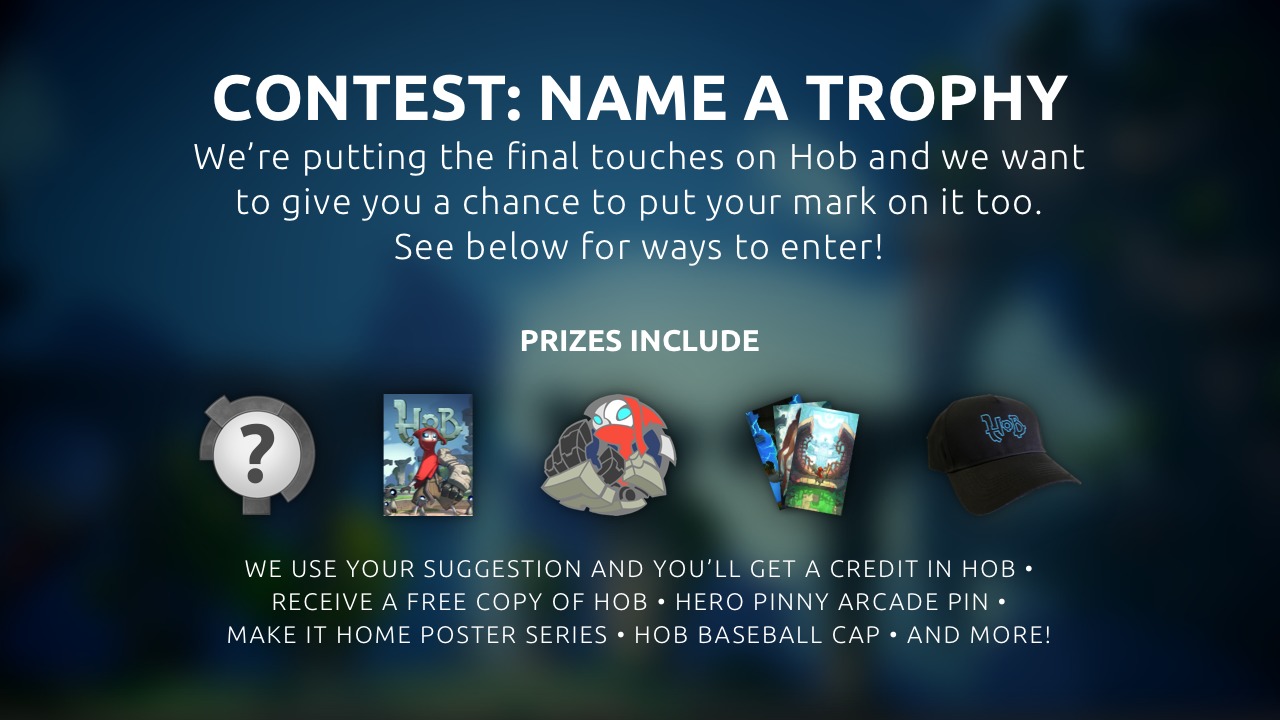 You can enter the contest across four different social platforms: Facebook, Twitter, Instagram, and Discord. It runs from now until Friday night. We will announce winners a week from today on Tuesday on the blog. You must reside within the US to win one of the physical prizes. However, we are accepting trophy name suggestions worldwide, and you can still win a digital prize as detailed below. Here's how to enter:

The contest runs from now until Friday night, and we will announce winners early next week. Everyone has a chance to name one of our trophies, get their name in the credits and win a free digital copy of Hob, but please note that you must reside within the US in order to be eligible to win a physical prize. Happy naming! 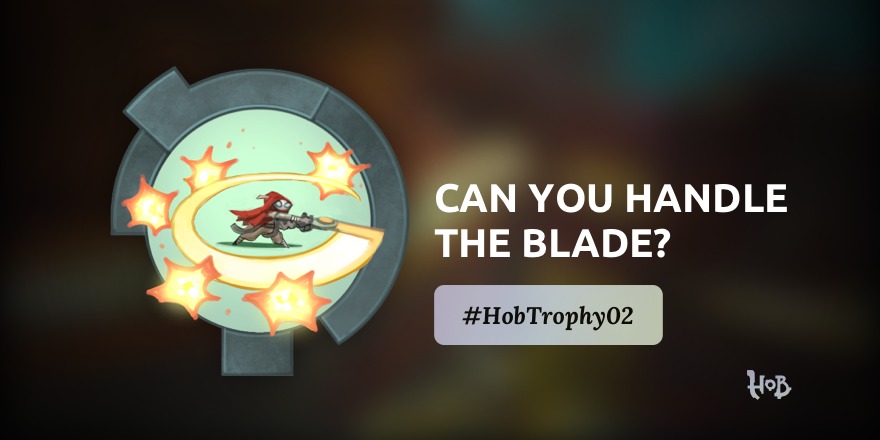 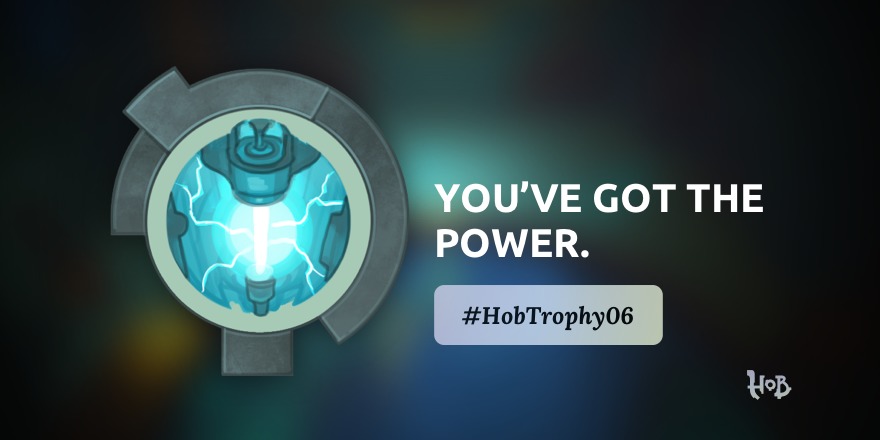 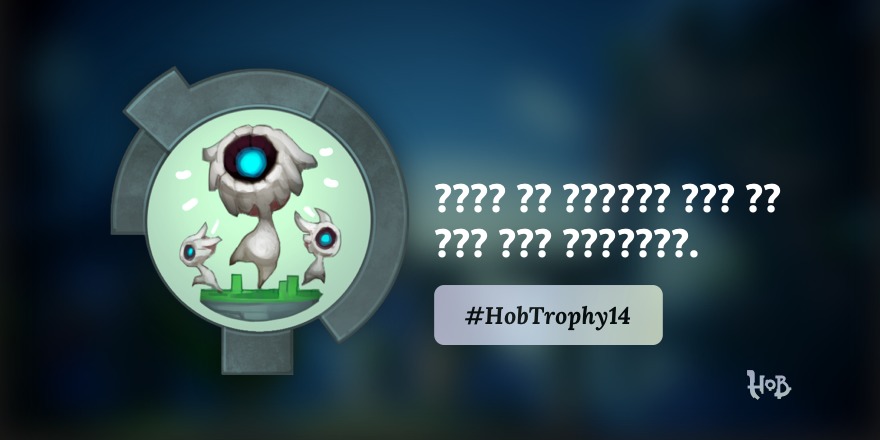 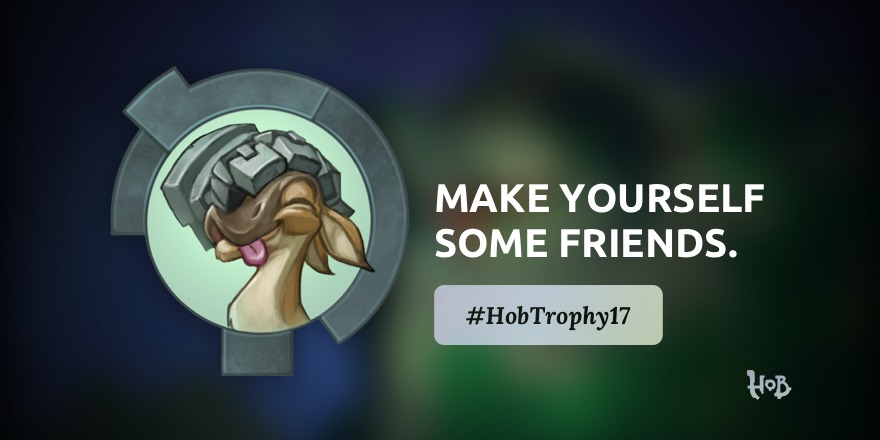 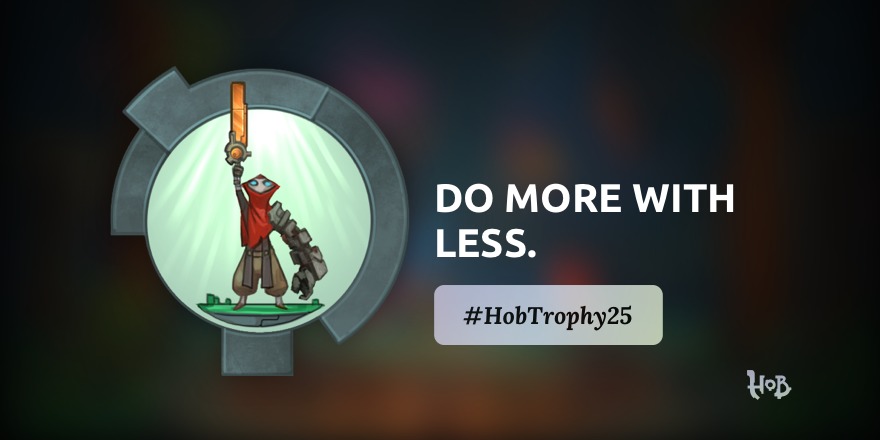 We can’t wait for you play Hob on September 26. Start your countdown clock . . . Fifty-six days to go!

Webbstre: I Showed Hob at BitSummit

You know by now that Hob's world has a mechanical core overgrown with natural layers of trees, meadows, forests, and almost too-symmetrical stonework. What you may not know is that many of the land masses in Hob are actually lying dormant far beneath the surface of the world. In this trailer, plunge into the depths of the World Machine to where the synthetic fuses with the organic. During your exploration you'll discover subterranean zones, ancient machinery, and a secret or two. Curious? Find out what we mean:

Today we are excited to announce we will be bringing Hob to GOG! We are so glad to be able to offer this to fans and players who know and love the GOG platform. We are big fans, too! This makes GOG our third platform, joining Steam and PlayStation 4. We love being able to provide more options for you to play Hob the way you want. 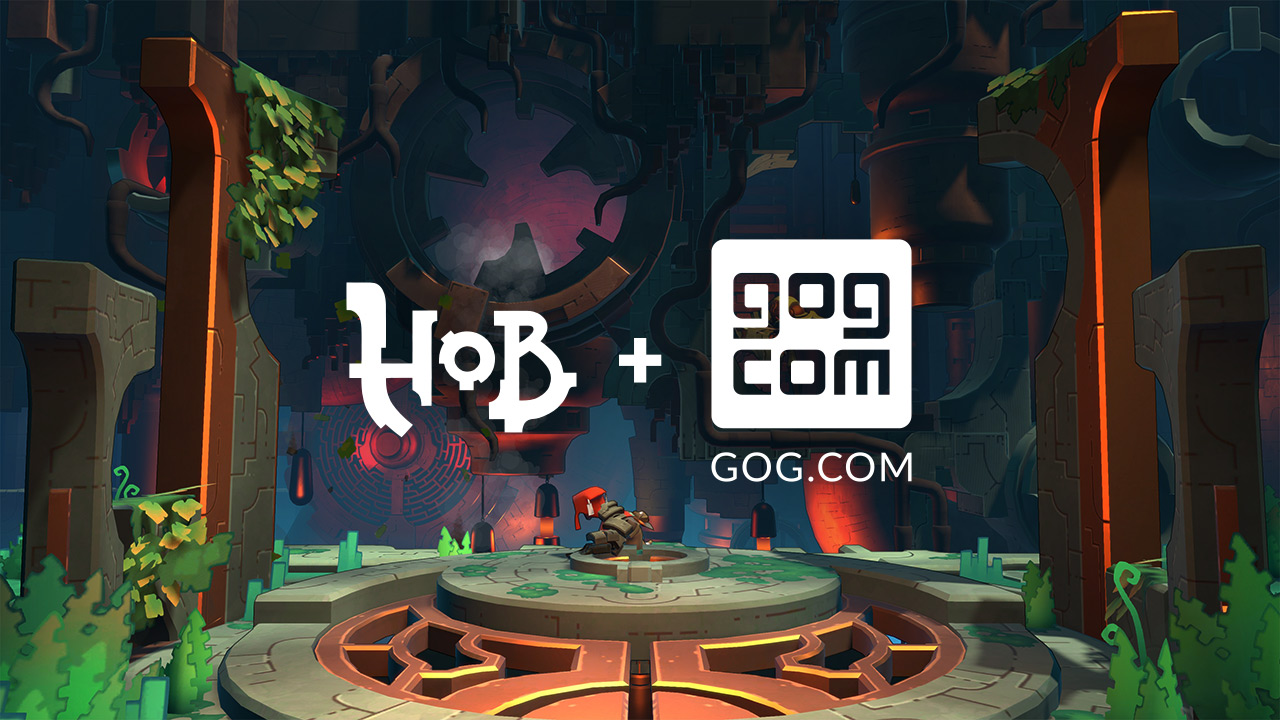 Are we friends on Facebook? Do you follow us on Instagram? We <3 you and need your validation in our lives. Plus, stay in the loop for future trailers, dev diaries, and announcements!

Webbstre: I Showed Hob at BitSummit

Many of you have heard of industry trade shows PAX and E3, but did you know that Runic Games sometimes shows their games at smaller trade shows in other parts of the world? Neither did I, until my pals and gals at Runic asked if I could help represent Hob at the Sony booth a few weeks ago. Who am I, you might ask? If you weren’t aware, I’ve been running Runic Games Fansite since just after the company was founded in 2008. I also happen to live dead center between Osaka and Kyoto in Japan, which made me the perfect (low cost) person to travel to the show.

BitSummit is best described as one of the biggest gaming conventions in Japan, debatably second only to Tokyo Game Show. There’s a big presence by Sony, Nintendo, Twitch, Kickstarter, IGN Japan, and loads of indie developers from all over the world. That’s in addition to a few recruitment booths by some of the local universities with their own cool demos on display. It lasts for a full two days, and the main stage is booked through both days with speakers from all over. If you’re ever in Kyoto in May, it is definitely worth a visit! I personally got to try out PlayStation VR and the Vive for the first time during the trip. 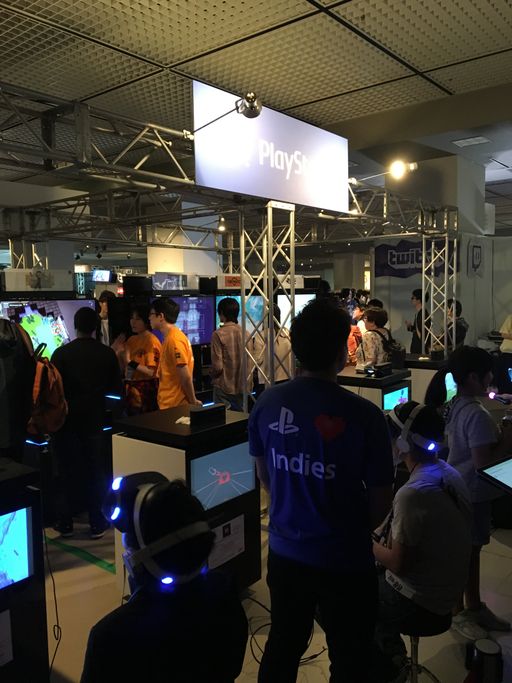 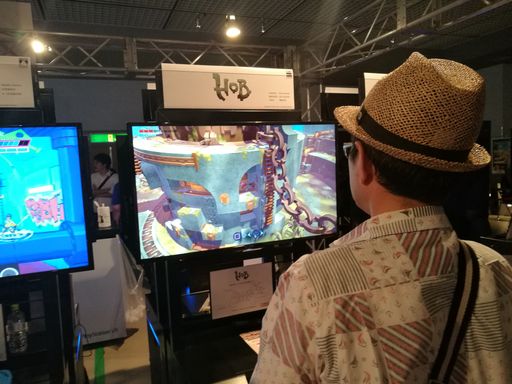 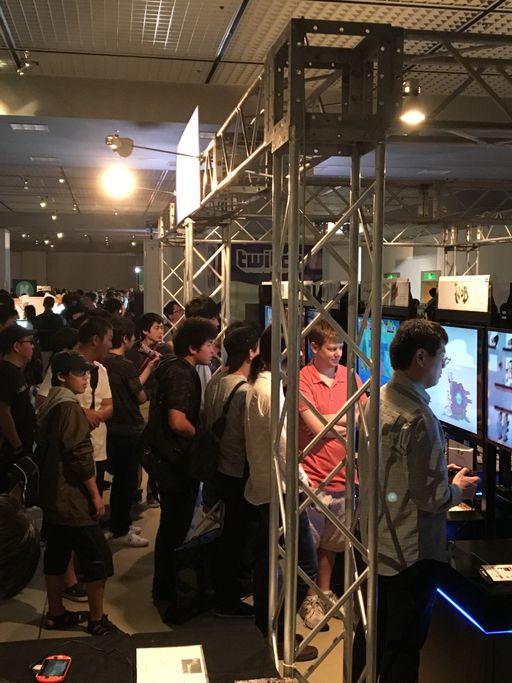 Enough about that, what about Hob?

Very patient question! Sony had probably over a dozen machines set up in their section, each with a different game on display. Sitting unobtrusively between Mr. Swifty and Lethal League was the PAX East 2017 build of Hob, usually with me standing beside it guiding people through the game. Most of these sections of the game have been seen in the press before, but in case you haven’t seen them I’ll guide you through an imaginary run-through:

Your character initially slides down onto the screen after a skipped cutscene, which I’ve heard involves the character gaining a robotic arm. How does that work, you ask? Well rumor has it that all life in this world is at least in part mechanical, which you can see from the rectangular grass and the awesome pipe-like tree roots. Seriously, I have a favorite tree in this game due entirely to the cool root system. Almost immediately your character finds a large plant, glowing red from the inside, and messily cuts it open and rips open a Tetris-like block that upgrades your maximum health by one block.

From there, you’ll find yourself under attack by invulnerable spiked vines, pod shooters attached to walls, and creepy purple monsters that call smaller versions of themselves from grates in the ground. Having a little trouble? I may recommend using your little warp power to stun the enemy. Too easy? See if you can finish it off with a punch instead of your sword to see a cool different death animation.

Next up are a series of puzzles that involve platform jumping, button smashing, and the complete rearrangement of the local scenery in what amounts to fixing an elevator. I may detour you to find some health restoring “strawberries” and an energy power-up. The music is beautiful. The gong-like noise as you finally restore the elevator platform is SO satisfying. Puzzles may be a bit old school in the difficulty level, in that a single two-degree mistake when jumping or warping may result in your splattery end on the ground.

The next portion of the demo is unusual for an action game in that it actually has nothing for you to fight. As you sink beneath the ground you see that the entire world is literally built from machines, some of which walk or crawl or weld things in the background. Don’t let that fool you though, as you may catch a glimpse of some smaller animals dashing around. Here you learn more of the basics of the game, such as how to use the teleporter pads, when to combine your skills (such as running and dashing) to avoid being squished, and how to rearrange the way you think in order to solve a variety of mechanical puzzles that result in large pieces of the land being raised back to the surface in front of your very eyes.

I won’t spoil anything more for you, but the general response to both the overworld and underground sections of the game was positive, with lots of people saying it paralleled a variety of different games from their past (often including Zelda). Everyone felt like it was one of the most beautiful games at the show, and the 30 minute demo was one of the most satisfying experiences that almost everyone stayed until the end. The response to the demo was so good that I recommended that Runic release a demo of the final version of this section, as it seems like the best way to bring in new players.

When can I try Hob?

The game doesn’t have a finalized release date yet, though it is estimated for sometime later this year. If you want to recommend a convention or other gaming event for Hob to be shown at, then you should absolutely suggest it to Runic! If it’s in Japan you might just be able to meet me! And if you have any questions (that I’m allowed to answer) you can ask me on Runic’s Discord server, the Forums, or over on Runic Games Fansite. Thanks to Runic for this opportunity, and I hope to see more of you all in the future!

Webbstre curates Runic Games Fansite and also has at least one item named for him in Torchlight II. "He probably has more posts than you."