Happy Friday! Last week in our PAX East Wrap Up Part One, we showed our Xbox award, a behind the scenes video of the con, and the exclusive reveal of the final pet, the Papillon. Today in Part II, we bring you the second PAX East exclusive: the opening cinematic!

We've kept this tightly under wraps until now, and this is the first time the public have been able to see it. We are excited to show you "New Heroes Will Arise."

"Heroes may fall, hope may fade, but new heroes will arise."

This particular cinematic opens the game, filling in the story between the end of Torchlight and the beginning of your hero's quest in Torchlight II. Art Director Jason Beck created all the storyboards, and Klei Entertainment animated the scenes with sound effects. JD Wiker wrote the script, and Matt Uelmen assisted with sound effects and provided the score. Here's Jason Beck with some insight into the process.

What led to the decision to include cinematics in Torchlight II?

It was really two things that led to the decision to include cinematics in Torchlight II.

One, we simply had the time and budget for it this time around… things that were in short supply for the first game.

Two, we were very aware that the story was an area where we could improve upon Torchlight greatly in a sequel. Like I said, we didn't have a whole lot of time to invest into properly setting up, fleshing out, and delivering a particularly engaging story for the first Torchlight. We had a lot of our backstory and key points mapped out "in our heads" (we have a collective hive mind), and we tried to hint at greater things where we could, but it wasn't necessarily translating into a narrative. We wanted to make sure we addressed that for Torchlight II.

We're still not making a "story game", but I think we do a much greater job for providing context and motivation with Torchlight II.

How did you arrive at the style?

When we started talking about doing cinematics we also had to be pragmatic… we couldn't go big-budget CG, nor did we want to go with in-game cutscenes. We landed on doing something that was heavily stylized and 2D. I think part of the hope is that going that route would be an unexpected solution that also meshed with our restrictions.

Our initial mockups looked like something that played out on a parchment surface; primarily muted colors with some vibrant colors for punctuation/contrast and a more graphic, inked rendering style.

Some of the inspirations included the opening 2D sequence in Kung-Fu Panda, the cinematics from Heavenly Sword, the flashback God of War 3 cinematics, and Samurai Jack. With that sort of style in mind, doing it all in Flash became a really attractive option. 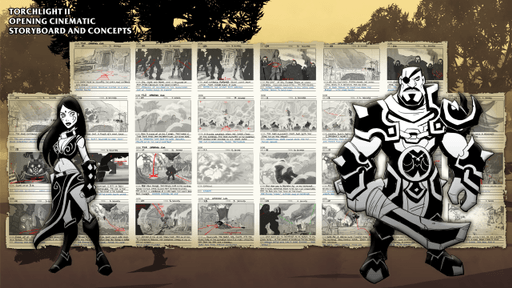 What made you choose to work with Klei, and what was the collaborative process like?

In our search for the right animation studio, we knew Jeff Agala and his art team at Klei came from a traditional 2D animation background. When we asked them for recommendations they offered to take on the project themselves and we immediately jumped at the chance to work with them. It seemed like just an absolute no-brainer for what we wanted stylistically and what they have shown to be so great at in their own games… and it proved to be so.

What can you tell us about the other cut scenes in Torchlight II?

Honestly? Not much. Why present a bit more story if you're just gonna spoil it ahead of time?

We tried to focus on the opening and closing cinematics and treat the two cinematics in the middle more as transitions. You could consider the cinematics in Torchlight II as having two majors and two minors.

Since our game is almost entirely from a three-quarter, top-down viewpoint we wanted to use the cinematics to give players views they simply didn't get in game; a bit more sense of place and environment with vistas they couldn't see otherwise.

Like our cinematic? Then be sure to check out Klei Entertainment's upcoming game, Mark of the Ninja, releasing this summer!