Making the World of Torchlight II

Every other week until E3, Runic Games is giving you a glimpse of the awesomeness that is Torchlight II! Last time around, we gave you a sneak peek of the music you will hear on your journey.

This week, we have a double feature! Here we are pulling back the curtain and giving players a sneak peek into a few environments of Torchlight II with an introduction by Patrick Blank, Lead Level Designer. We will be explaining a bit about what to expect from the different types of areas, how they are technically different from each other, and how the environments compare to the first Torchlight game. In addition, we have a Level Design Q & A with Patrick Blank and Jason Beck with questions asked by Runic Forums members.

Making the World of Torchlight II by Patrick Blank

Let's talk about Passes first, and give a few examples of what makes them different. Passes are tighter and typically more heavily themed areas that connect between other zones. They offer players a different feel and gameplay experience from the Overworld areas. These are more of a push your way through to the other end type of levels. Passes are also randomized in many ways. There are multiple versions of each pass that can roll, and even within each version, there are several random elements that can change your gameplay experience every time.

One of the early Passes in the game is called "Path of the Honored Dead". This area is dark and dreary, covered in fog, and crawling with all types of walking dead. Basically, it's always a Monday in here. This pass is the cemetery/memorial of the Estherian Enclave. The area is lined with graves, and shrines, and is home to the dungeon, "The Defiled Crypt", the first dungeon players will encounter in the game. 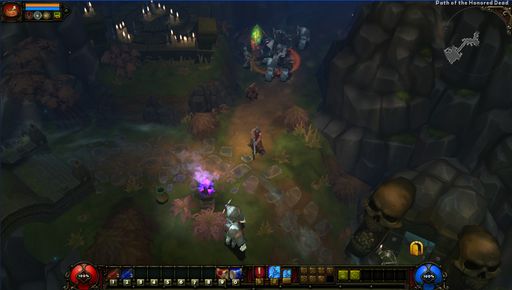 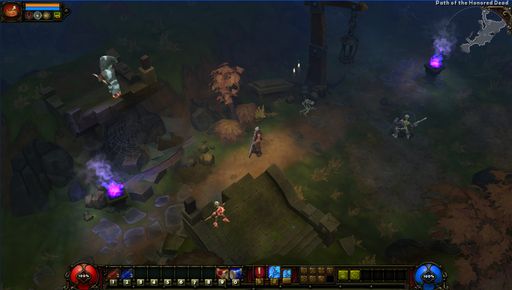 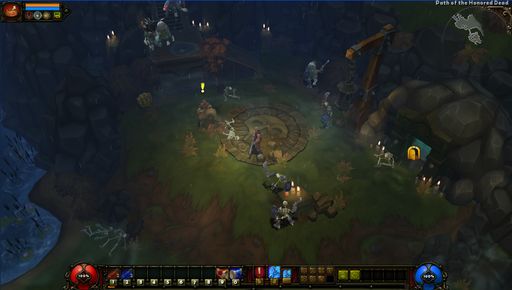 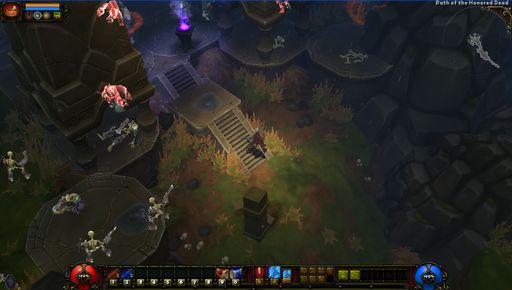 Now let's look at Overworld areas. Overworld areas are larger, more open and fully explorable. As soon as you enter one, you are free to go off in any direction you like. They are the big playgrounds of Torchlight II. Players can easily spend a lot of their time just exploring and finding little surprises everywhere. They also fully randomize just like dungeons do, so the possible variations are endless. To give you a sense of the scale these typically are, let's do a comparison. Torchlight I's largest levels were towards the end of the game in "The Black Palace." The largest floor was about 6-7 chunks in size, and very linear. A typical overworld area in Torchlight II can contain up to around 23 chunks in size.

The first overworld area players will experience is "The Temple Steppes". It is lush green tundra, with rolling and hilly terrain, and has a landmark river running through it from one end to the other. The direction of the river randomizes every time a new game is created and the area generated. The Temple Steppes is an open sandbox that houses multiple random dungeons, quest specific dungeons, landmark areas, and random events. The Slavers Camp and the Garden of Tears cemetery are just a few landmarks you will find in this area. Each of these has a corresponding tailored dungeon beneath it. Landmarks are constant, they will always be present in every new game, but where they are and what they look like can randomize each time. 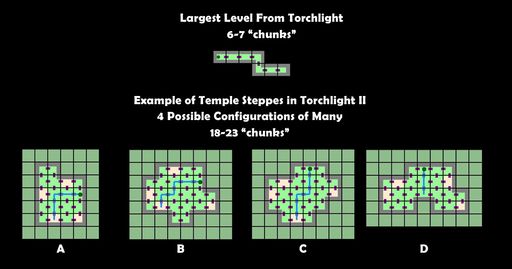 What about good old fashioned dungeons from Torchlight? There are several new fully randomized dungeons scattered across the different regions to explore in Torchlight II. We'll leave what those different types are for players to discover themselves. From a technical standpoint, we’ve really tried to raise the bar with interiors since the last game. Rooms are much more densely detailed with decorations, have new effects, and lighting tricks that help push the mood and atmosphere.

We have also added new chunktypes to all of our interior dungeons this time around. There are now 3-way T-junctions, and end caps. So the interiors won't always be an extremely linear path to the stairs down to the next floor, there will be offshoots to explore. There are both large main dungeons, and smaller random dungeons mixed throughout.

Regardless of what size dungeon you enter, we wanted players to always feel rewarded for putting in the time to explore. So expect a reward at the end of your path. Don't worry about having to backtrack all the way back up the way you came either. We’ve taken care of that with end room portals to conveniently send you back up outside the entrance of the dungeon if you choose to use it. 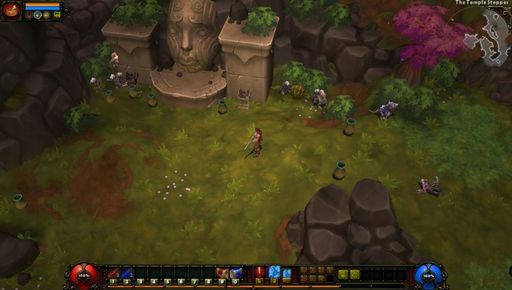 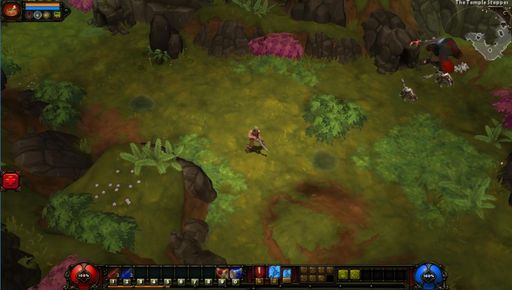 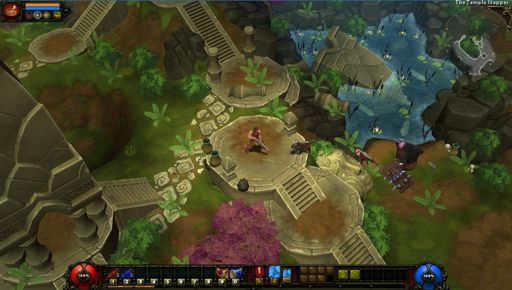 That's it for now. I hope everybody has enjoyed this short preview into what's new with level design in Torchlight II! We are really excited for people to experience the game for themselves.