It's here! After lots of packaging, tweaking, and testing, we're rolling out the new Torchlight II editor - GUTS. In this action-packed update we have some important information on what exactly GUTS is and how it can work for you. You might want to bookmark this page for later. Ready? Here we go!

GUTS is our in-house development tool. It lets you modify almost everything about Torchlight II, from item and skill balance, to level layouts, animations, quests, and much more. GUTS mods can be shared with your friends, and multiplayer games using mods can be found in the modded games lobby. In addition, A new launcher lets you customize which mods are currently active.

When playing modded games, you can view your mod history, any previously played mods, and the impact disabling mods may have on your character.

We've also added a special tool to GUTS designed to convert pre-GUTS mods into the official mod format, with an eye toward making the transition much easier for our ambitious early modders.

We've tried to make the process as seamless as possible, with a focus on allowing modded multiplayer games with a minimum of fuss.

Torchlight II now fully supports Steam Workshop. Steam Workshop integration allows for automatic mod subscription and synchronization for any mods hosted on the Workshop. When playing Internet games you will be able to filter modded games by mod combination in the lobby, and with a single button click, subscribe to those mods. Torchlight II will then restart, synchronize and activate them before returning you to the game.

New to modding? Here's how to get started with GUTS - the Torchlight II GUTS wiki that we have been working on. You will definitely want to bookmark this resource!

We've been working on lots of new content! Here is a taste of what awaits you …

Tools Engineer Greg Brown created GUTS, and he's the best man to tell you more about it. 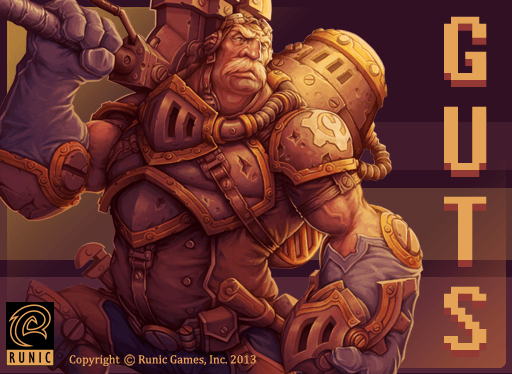 Tell us about GUTS! Does it stand for anything? How did that name come about?

GUTS is the new version of our content editor we used to create all the content for Torchlight II. We use it to make most things in the game - Levels, skills, classes, monsters, items, spawn classes, balance curves, UI, etc. Pretty much the only things we don't use it for are model, animation, 2D art/texture, and music/sound creation. We use 3D Studio Max, Photoshop, and whatever Matt uses down in California for those. We started this project with "TorchED" which was used for Torchlight, but we've made a large number of improvements and additions for GUTS.

GUTS doesn't really stand for anything. The dry and boring story is that we compile the game source as a DLL for the editor which was originally called "core.dll" but that was confusing because we had another class called "core" so I changed the name to "editorguts.dll" at some point. Although later I think I was playing Shao-Lin's Road on the cocktail cabinet in the office and was amused by the protagonist saying "GUTS!" at the end of each level while flexing. I also enjoyed the Nickelodeon show and dream of owning a piece of the Aggro Crag. I mostly wanted to differentiate the new version from the last and I like the mental image of being elbows-deep in the guts of the game when you use the editor. Also, my Mom tells me Grandma wouldn't let her say "guts" as a kid, which I've always found amusing.

What are some of the challenges you face when creating the tool set? What did you enjoy about it?

The original "TorchED" project was done in the same amount of time as Torchlight. We hit the ground running and were making the tools as we were engineering the game. We were laying track as the train was running across them, more or less. For Torchlight II, we already had a that work done, so I was able to go back and refine a lot of the rough spots and improve the tools in many ways without worrying as much about the train.

A significant challenge when making these tools has always been engineering with modding in mind. It does take quite a bit of time to design game and tool features around making them easily and flexibly moddable through editing game data, but it ends up being really fun to see what people come up with in the end and it adds a lot of longevity to the game.

As far as enjoyment, I very much enjoy working with so many different part of the team and game. I enjoy having the freedom to work on little utilities I think up in the shower or as I'm riding the bus home (some of which end up being very useful, others… not so useful). I really enjoy taking a little time to make long and difficult processes easier and automated.

How do you hope players will respond to the tools?

I hope people find them useful. People are already modding Torchlight II without GUTS and doing really cool things. I can only hope to help them do more, faster, and with less headache. I do worry at times that some people will be let down when they realize GUTS isn't a "Runic Games General Game Development Kit." GUTS is very much a Torchlight II content development tool. You can do lots of neat things as long as you want to make them for Torchlight II or a Torchlight II-like game. If someone is looking to make a different sort of game, they should probably look elsewhere.

I hope people keep doing what they've already been doing. I love seeing people work as a community to learn, teach, and create mods together. We're releasing our tools and we engineered our game this way because we enjoy giving people a fun platform for creativity and insight into the, uh, guts of the game. (Get it? Guts?!) I spent many hours in high school creating many terrible levels with the the Duke Nukem 3D Build engine and it makes me happy to be able to pass that experience on to others.

Tell us about the NetherRealm tileset - what's the inspiration?

Well, we had a very small taste of it in Torchlight II, and certainly hints of what that realm might look like, but we never crossed over, so to speak. So, the main idea was to go "into the portal" and visit the NetherRealm. We wanted it to feel as organic as possible and as dissimilar as we could make it to the other tilesets. Everything is built on a grid, and in some tilesets it's very apparent (as much as we tried to disguise it). This tileset had to look chaotic, organic, and make you forget about the grid. Along with that, we really wanted it to look barren, harsh, and completely alien. 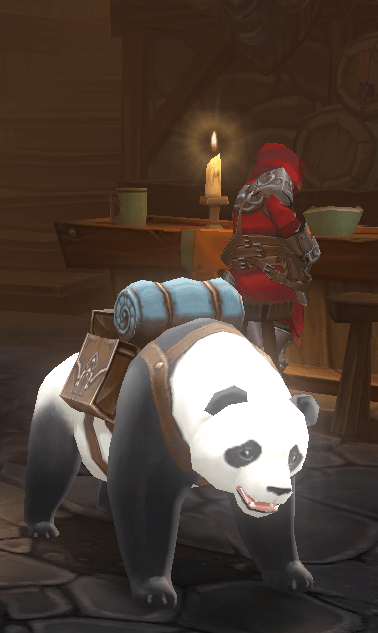 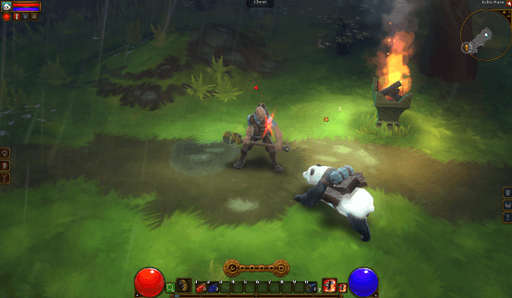 What kind of new monsters should players be on the look out for?

All of the new monsters are from the NetherRealm. The Netherim have gained a few units and there's some very interesting (un)natural inhabitants. We went a little bit darker and grosser, but still very much Torchlight II designs. 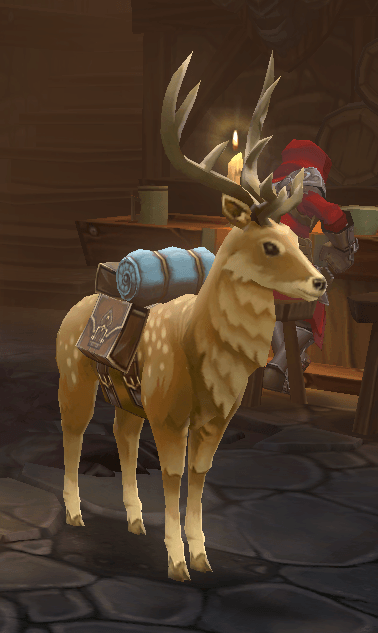 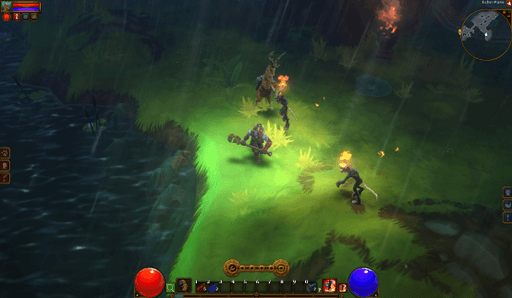 How did the headcrab end up being a pet?

We were working on Workshop integration and we love the folks at Valve/Steam – they've been really supportive of our team and games – so, we approached them with a completed headcrab pet and they loved it. It was mostly a matter of timing and trying to unleash it at a point where it made the most sense. We have other things in the works as well. 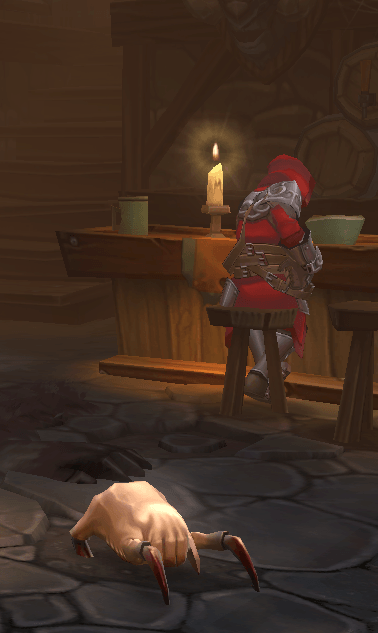 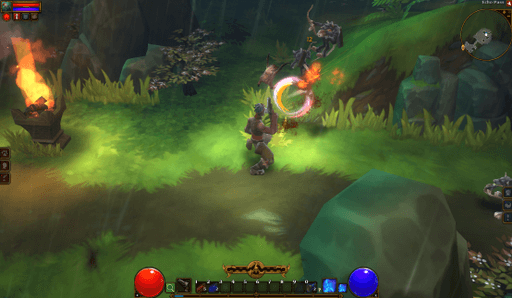 What are you most excited about in this update?

Along with the new tileset and monsters we also created new wardrobe and weaponry. Each class has a brand new top-tier armor set and each weapon type has additional items. And, of course, we have new pets. I never would have imagined an alpaca would be my choice of pet for a game like this, but it is incredible. Mostly I'm just excited to bring more content to the players and help them extend their adventures. 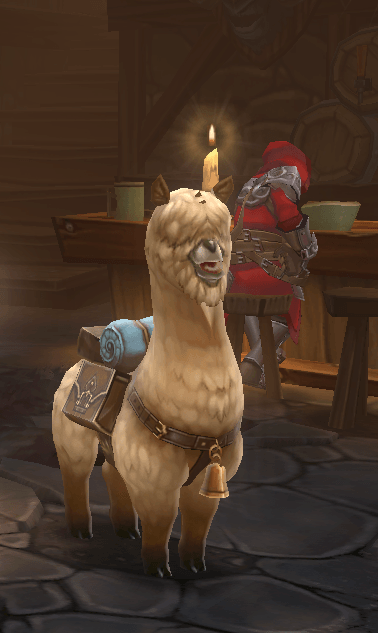 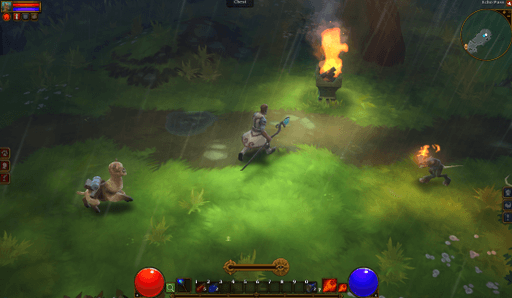 Tell us about the NetherRealm tileset - what's the inspiration?

We wanted to do something completely different than players had already seen in the game. Further exploring where the NetherRealm came from was brought up as an idea by our art director Jason Beck. After discussing what we could do with that, everybody became excited about how different it was, and seemed like a good fit, so we ran with it. 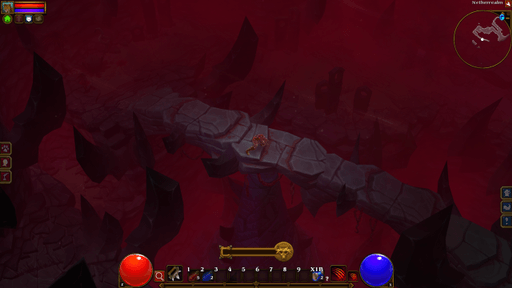 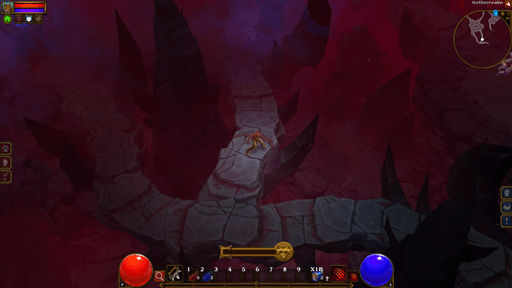 Besides just being visually different, gameplay wise, we wanted the terrain to offer something different. Originally, due to time constraints, we weren't planning on doing bridges. However, a few pieces were made, and after level design started experimenting with them, we quickly realized that using the bridges in a weird, winding way, and changing elevations with them was what really gave the tileset character, and drastically altered the overall vibe in a very cool way. The result is great. A lot of people here agree that it's one of the coolest tilesets for the game now. 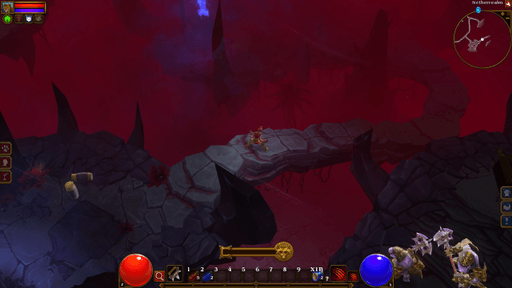 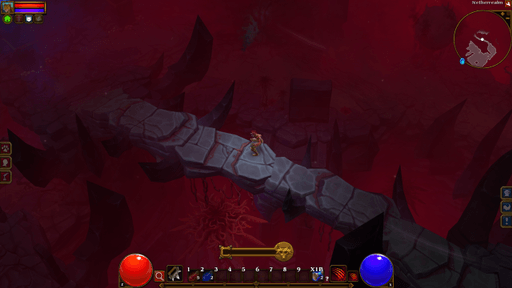 How can players find it?

Players can enter the NetherRealm via random portals that have a chance to show up in the Overworld areas. These portals will start showing up in Act 2, and Act 3 in normal game mode. In any NG+ mode, they will show up in all Acts, including Act 1. The portals are pretty distinct, and will be hard to miss. 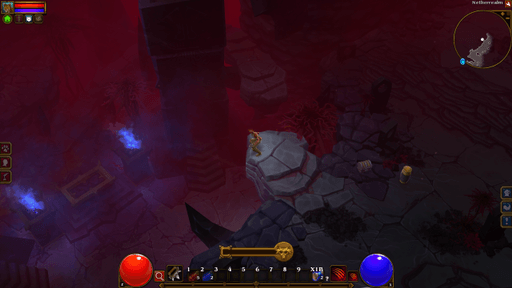 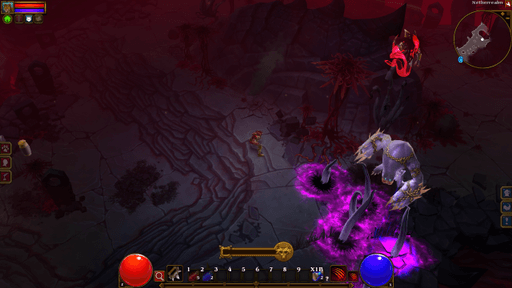 Anything players should be on the lookout for?

There are new monsters in the NetherRealm, and some entirely new variants on existing monsters as well. No big easter eggs, although I'm sure a particular level designer wrote his name out of vines or something in at least one of the levels…

We also have added several new "NG+ only" dungeons throughout the game. These will show up in any NG+ mode. We wanted to give players who have already completed the game incentive to go back through and explore new areas. These dungeons will always roll 100%, and are located in passes and Overworld areas.

There are also a few new NG+ Random Events that can spawn in in various parts of the game to add some new variety, as well as a few new phase beast rooms.

We want to highlight the Runic Games Fansite, graciously run by Webbstre, who are huge supporters of the mod community in Torchlight and Torchlight II. Head on over and see what they have for you!

Enjoy the new updates, and thank you for playing!