Happy Thursday, everyone! In February we announced the winners of our Torchlight II Armor Design Contest. Today we have an update on the armor sets including screenshots, an interview with the artists who integrated the armors into the game, and a special download for you modders out there to get you started creating your own!

How did you decide who was going to work on which set?

Jeff: Well there are only two of us on the character team in house so we each decided to do one. I wanted to work on the Ember/crystal armor because of how solid it felt was but also because it was a little more abstract than the other more traditional design. That being said I think they're both great designs and both turned out great in-game. 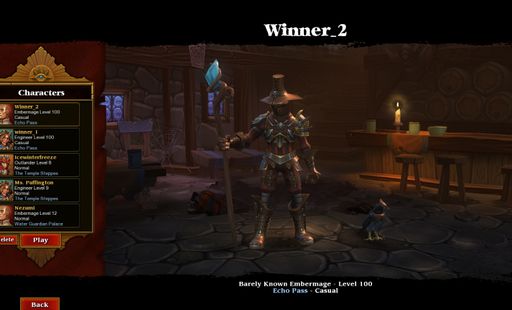 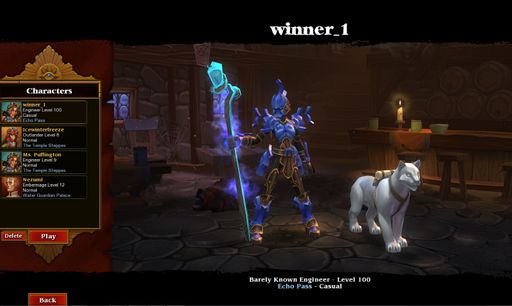 What appealed to you most about the armor set you worked on?

Jamus: The sultry lines, the smell of old leather… the come-hither hidden eyes… oh wait, not like that? I uhhh… I mean it was a cool armor, y'know all armory and stuff. I worked on the warlock armor as we're now calling it, I believe. Mostly I enjoyed the Solomon Kane vibe and it reminded me of old work I had done for Warhammer Online. It’s very different than most of our looks in game so it filled a nice niche to increase diversity.

Jeff: The shapes and material were interesting. It's also very reminiscent of the armors from TL1 in terms of how its "theme" of Ember/crystal is distributed on all the parts of the armor, so it was kinda fun to work with that. I also like all the angles and "solid" pieces to this armor. It feels good to run around in-game wearing it.

What class do you really see this armor set best suiting (ba-dum-ching)?

Jamus: In my eyes it's a lighter armor set, and the overall aesthetic fits the Outlander best. Thankfully though I am spared from such burdened decisions and you can equip it for any class.

Jeff: One of the reasons we wanted to do two different armor sets is that we wanted one to be a more armored, "heavy" set, and a more agile "light" set. So this crystal set was seen as a "heavy" type set because it was fully armored form head to toe. However it also has a very magical feel and I think it actually fits the Embermage pretty well, even though he/she isn't generally a heavy-armor wearing class. 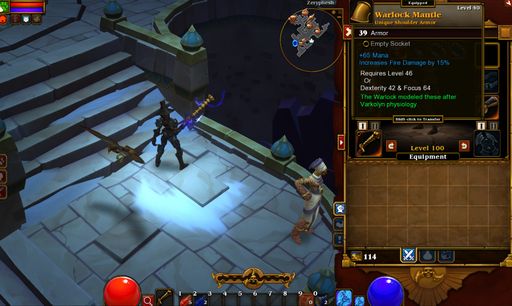 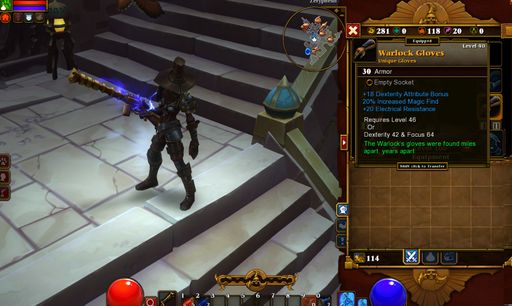 What changes, if any, did you make to fit better into the Torchlight II universe?

Jamus: Both of the contest winners went through a design pass by Kyle, our concept artist. The main issues addressed on this one was chunking up the detail a little more to make it more readable (thicker stripes and larger throwing knives, etc.), some tweaks to the shoulders and neck wraps to alleviate clipping with other sets, and finally we tweaked the overall design slightly to be more synchronous in some places so as to best use our UV space.

Jeff: This set was generally pretty Torchlight-y to begin with, that's one of the main reason we chose it. The major changes we made were clarifying the details of the suit so it could be more easily translated into 3D and adding some to the silhouette to make it stand out a bit more on the head and the shoulders.

So with these new armors how many armor sets are in the game now?

Jamus: Well after finishing these two and with one or two more surprises hidden away we are now up to 83 Armors. That is comprised of 24 class specific armors (six for each class) and 59 universal armors that can be equipped by anyone. That means there will be 65 different looks for each class you play! So I’m pretty sure with six different equipable visual components that means me have precisely a bajillionty number of combinations; a little under a bajillionty if you choose to hide your helmet in your options… You can quote me on that… 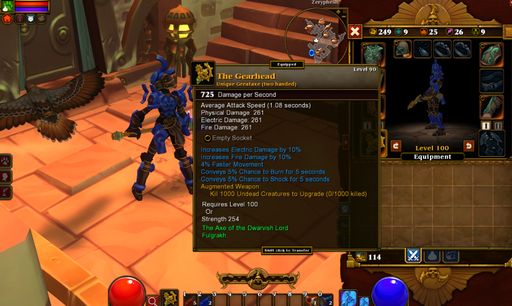 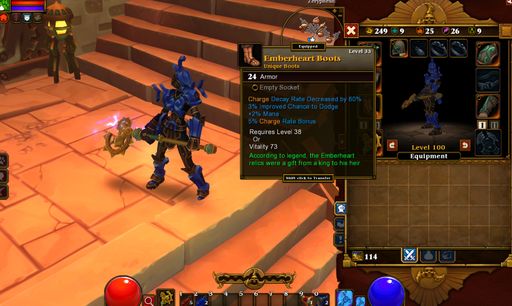 How many more armors do you have left to complete?

Jamus: We is done, yo! We have been using this time to go back through and fix clipping as much as possible, tweak some textures and designs. Overall make everything even shinier, but ultimately all the armors are now officially in game and you can put on your party pants and dance around in them.

Lots of people have been excited for the mod possibilities of Torchlight II. How difficult or easy will it be for a modder to make their own armors?

Jamus: Well there’s a fair amount that goes into it… but ultimately it’s pretty easy on the art side. First, using whatever independent 3D program you have, you have to build the armor. You could also just re-paint a texture in a paint program if you aren’t looking to change the geometry. Once you have your art assembled you will need to ID the parts so they work in our wardrobe system, or cut up the textures in their appropriate individual files. At that point it goes over to an export and you set up the actual armor stats etc. We will release a tutorial on those things right after launch I imagine … but until then we cooked up some happy fun.

Inspired to start modding your own armor for Torchlight II? Here's a handy download to get your armor mods underway: the base character models used by our own character artists.